A rugged design for TUF use cases

ASUS has revealed their first TUF series PC case, the TUF Gaming GT501, a finalised version of the enclosure they announced at Computex 2018, offering the same rugged, militaristic design with the same water cooling potential.

When compared to the Computex prototype, ASUS has added a vertical GPU mount to the chassis and has made a few aesthetic tweaks, though the ATX case still offers the same basic appearance as the original, offering users a textured metal front panel, a large tempered glass side-panel and an armour plate look that is undeniably TUF.

By default, this case supports four 3.5/2.5-inch drives as well as three additional 2.5-inch drives, ATX motherboards (with larger board overhanging the case's grommeted sections) and two 280mm or 320mm water cooling radiators (Top and Front). This case will ship with three front-mounted 120mm AURA RGB fans, as well as a single 140mm PWM fan that acts as an exhaust.

One of this case's unique features is its large cotton fibre handles, which are said to be able to handle system weights of up to 30kg without issue. The GT501 also sports an integrated 4-way fan controller, which is controllable via USB 2.0 motherboard headers and RGB lighting. This can be controlled using ASUS' Fan Xpert 4 and AURA Sync software respectively. 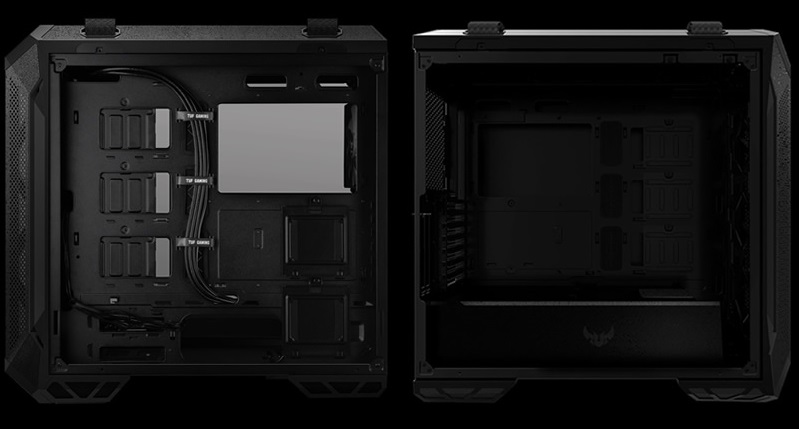 At Computex, ASUS stated that they were considering a $149 price point, though this may have changed since the prototype's unveiling. At this time we do not know this case's final pricing or when we will see it hit store shelves.

You can join the discussion on ASUS' TUF Gaming GT501 PC Enclosure on the OC3D Forums.

Peace Đ
I like the handles, but would you really carry a watercooled PC around? Weight + possibility of leaks or breaks = big nay nay, right?Quote

Warchild
Is this an updated C70 case?Quote

fu11m3t41j4ck3t
Quote:
I Also got the C70 Vibe from it. Not a bad thing though I really liked doing builds in mine until I needed something bigger than a mid tower.Quote

Warchild
Quote:
Nah nothing wrong with it, I just wonder if they dropped the C70 naming to flow with the rest of their product range.Quote

Dawelio
Quote:
If it's the case I'm thinking of, you do know the C70 was a Corsair case right?...Quote
Reply