We should expect to see Zen 3 before the end of the year.

Many AMD fans were left annoyed after AMD's CES 2020 keynote. AMD didn't talk about its future roadmap or any product launches that extended beyond the first two quarters of this year. Why wasn't Zen 3 or RDNA 2 being hyped?

The simple answer to this question is simple. AMD just launched a range of new Zen 2 processors and its Radeon RX 5600 XT, a first-generation RDNA graphics card. It is not in AMD's best interests to start hyping up its next-generation platforms; especially if they are due to deliver another large generational leap in performance. AMD needs to sell what it has on store shelves, not what it will have in stock in 6-8 months.

In a post keynote interview, Anandtech's Ian Cutress asked Lisa Su, AMD's CEO, if she would comment on Zen 3's release. In response, Lisa Su confirmed that we could expect to "see Zen 3 in 2020", highlighting that Zen 2 is the best CPU core that AMD offers at this time.

AMD has been able to keep to a regular release schedule with its Zen series of processors, with each generation coming 12-18 months after its predecessor. Zen 3 is due to deliver some major design improvements to AMD's Zen core architecture, which many hope will help deliver further single-threaded performance improvements and efficiency gains.

Now that AMD has released Zen 2 onto the mainstream desktop, enterprise, high-end desktop and notebook markets, all AMD needs to focus on is delivering Zen 3 on time. Zen 3 is due to release in the second half of 2020, making it possible that we will hear more about the architecture at Computex 2020 or E3 (if AMD wanted to focus on gaming performance with Zen 3). At a minimum, we should expect AMD to talk about its RDNA 2 graphics architecture at these events, given its usage in Microsoft's next-generation Xbox console. 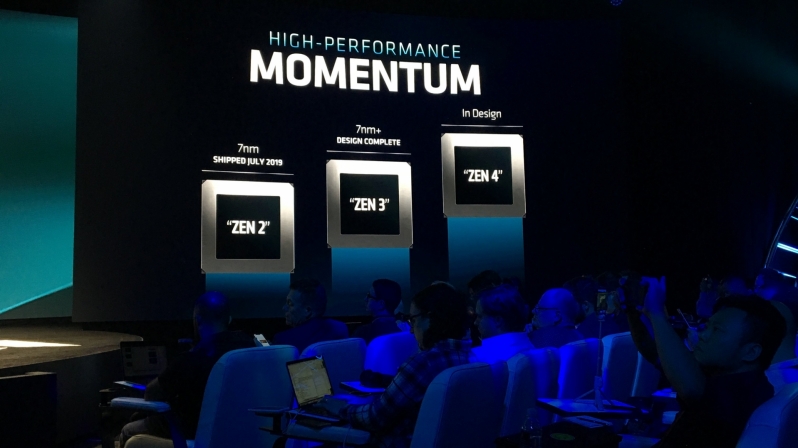 Why did AMD not mention Zen 3 at CES? The simple answer is that AMD needs to focus on selling the products that it has on store shelves. With Zen 2's current performance, AMD doesn't feel the need to feed into any "wait for Zen 3" sentiments. Showing confidence in Zen 2 was the right move for AMD in this instance, which means that we will likely need to wait months before we hear AMD talk about its next-generation products.

You can join the discussion on AMD's confirmation that "will see Zen 3 in 2020" on the OC3D Forums.

AlienALX
Is this a refresh or another shrink?

If it's the latter then whoa Neddy, slow dayun.Quote

Warchild
Look at the size on that threadripper... its a monster

tgrech
Quote:
Neither really, it's 7nm+ so will be a small shrink, but the key point is it's a new design/architecture.Quote